When I heard about Deaf Awareness week, I knew I wanted to know more, it isn't something I have any experience of personally, however I find it useful to understand a bit more about conditions that others are living with. You never know when you might meet someone and it might come in useful.

Deafness or hearing loss happens when one or more part of the ear are not working properly. There are different types of deafness and different levels of seveerity, having done a bit of reading, it really its quite a complex and varied condition. However, when I started researching, I knew exactly the person I wanted to hear from!

A few years ago Mary got in touch when shopping for Christmas Gifts for her two children. It was lovely to be able to recommend certain toys and since then Mary has given me so many recommendations of toys which I now stock and have be enjoyd by many.

Mary has a son called Ewan Age 5 who is Deaf, and they really are very inspirational. 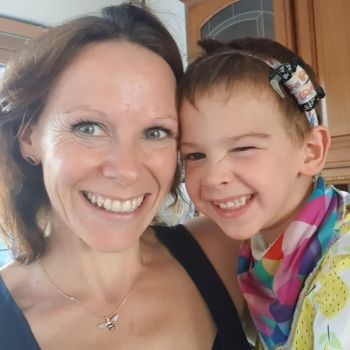 Here Mary talks about her journey with Ewan and provides an insight into how they have adjusted to living with deafness.

The Start of our Journey

"When Ewan was born we knew he could hear, he turned and looked at me when I spoke to him. Then he had his cardiac arrest (he has a few reasons why he may be deaf and we all have our own theories, no one can say why), So because he had been in NICU he had to have his normal hearing test and another specific one which tests the responses from the brain. He passed the normal hearing test but failed the brain response test.  We were told by the doctor that Ewan possibly wasn't hearing and we would need to come back in about a week for more thorough testing. We just thought the test was wrong and nothing was emphasised and we went home.

About a week later we returned to hospital for testing. We were in for 8hrs with an Audiologist and someone training. They said his case was unusual (they were excited about him which was actually really horrible to feel), Ewan was diagnosed with ANSD Auditory Neuropathy Spectrum Disorder - the electic pulse to that sends the sound messages to the brain didn’t work properly and he could not hear. I was told no hearing aids would work for him (I only knew of hearing aids and so it soon hit me he was deaf and would never hear my voice ) but they said he may be able to have cochlear implants, computers that sit on the skull inside the head. They said if we stood him next to a jet engine he wouldn’t hear it .

At this point in time our son was still medically very fragile and I felt he had everything thrown at him, surely he couldn't have anymore bad luck. I felt completely numb. I couldn’t show my emotion until I got home I just went to bed. We actually had a GP appointment to see how Ewan had got on the last week at home I just cried inconsolably to the Doctor.

Everything Ewan had been through so far in his life, but this felt the worst. He had overcome a cardiac arrest, liver failure where we had to get specialist treatment from Birmingham Children’s Hospital, complicated blood glucose for weeks, he caught CMV (a virus) hyperbilirubinemia and then we were hit with the diagnosis he was completely deaf.  Apart from CMV because he caught that outside the womb, any of the others could have caused his hearing loss.

I just couldn’t believe how this could all happen to him, to my baby, what had we done to deserve this, am I a bad person.......

My husband Matt, was quite upbeat and kept me going, he said deafness isn’t the worst diagnosis, he said cochlear implants are incredible and he had been reading up about then. He was such a support. He said we’d been through hell and this wasn’t so bad. And you know what we had got through everything else together, we were learning it all, it was just scary because it was new, because we didn’t really know deaf people other than older generations. No one in our family is deaf so it really was new. We thought we would get through it, the health professionals know what they are doing, they wouldn’t mention cochlear implants if it was way off so we thought that’s the route and journey we would look into."

What are Cochlear Implants? 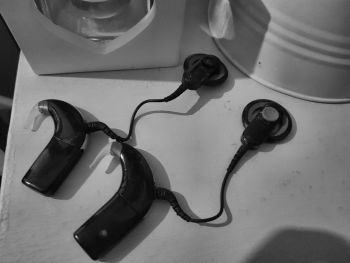 A cochlear implant is a type of implanted hearing device that converts sound into electrical signals. It is fitted under the skin behind the ear during an operation The second part of the devise is external and worn like a hearing aid. It is normally suitable for children who have profound and permanent deafness where a hearing aid is not affective.

Ewan had his Cohclear Implants fitted before he was 18 months old and it took 2 separate operations to get it right. 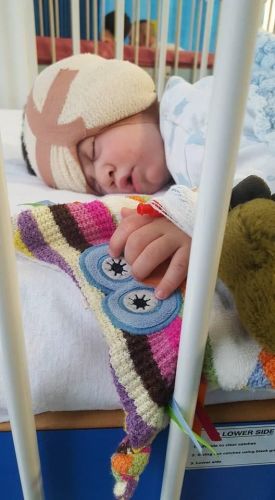 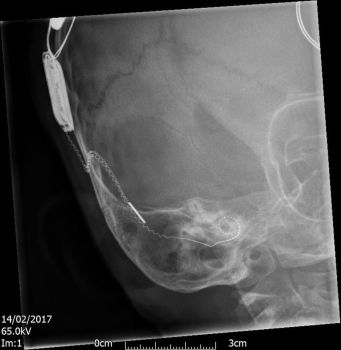 How have Cochlear Implants affected you?

"Now we never look back! Cochlear implants are the way forward for so many, they’ve definitely helped with his physical disabilities because he can be encouraged so much better. He’s gone from not hearing anything below 120 decibel to readings down to 20 decibel with his implants on!!  I mean that is the miracle of science and we are just so grateful for it and everyone involved."

Chosing toys for your child is a consideration for all parents, what are their likes and dislikes, factoring in their abilities and also understanding how you might use the toys at home. Where deafness is a consideration, you may look at more visually appealing toys, sensory toys, bright, colour panels, smells. Interactive games such as peek-a-boo can be great with some fabric silks which also have a great feel to them.

How do you chose toys for Ewan?

"Prior to the Operations Ewan had no hearing at all, Sensory toys became even more important with lots of visual stimulation and the use of signing to communicate. I made more sensory play zones for him, More than I had done for his hearing sister. I made the changing area more sensory. I started to learn BSL and teach Ewan from 3 months old. Unfortunately Ewan wasn’t physically able to sign back to me until he was 2yrs 2months but he had been understanding me, I always knew he was understanding me. We still use it as part of our total communication." 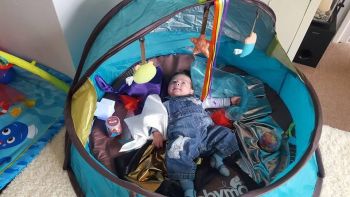 "I was always very conscious of what toys I bought him. They needed to be visually stimulating but not too stimulating that it was too much for him. So the classic (plastic) light up and noisy ones just didn’t work for us. This is when I went down the wooden toy route as they offered him something else. They also didn’t upset me like the sound ones did. I was sad he couldn’t hear them so would rather just not have them.

Play silks, scented like tea in voile worked well for sensory toys, balls to roll. Ewan obviously has severe physical problems so this has been slow going progress with moving through our toys. Each wooden toy offer such a huge age range so that is better for us too. Rather than many of the classic childrens toys that last a few months then your child out grows them. I look for longevity in a toy more.

Story sacks are the best!! They help in so many ways, visual stimulation, learning signs, sequencing, retelling. In the early days when he didn’t have his implants or when he was learning the noise of his implants I needed to be visually in the right place. So not in front of a bright window where I would become a dark shadow. I needed to be close enough for him to read my lips but then when he got his implants I need to sit to his side to talk, I don’t want him cheating by lip reading I needed to teach him to hear with his implants. This is still the same now. Need a quiet undistracting environment so he can hear me.
I can check each implant is working at this time too by taking one off and getting him to listen." 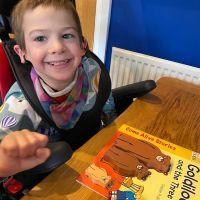 How if life different now?

"Life’s different in so far as he does not wear his implants at night, they are on from 7am till 8/9pm. He’s completely deaf during the night

During the night we use sign and gesture to communicate, he's up during the night and it's important we find out what is wrong and how we can help him.

He also doesn’t wear them for swimming or bath time or paddling pool. They do do a waterproof cover but he prefers not to wear them. So he’s completely deaf at those times.

They come off on the boucy castle, some plastic slides (the ones that you get an electric shock on) and trampolines because of the static electricity can impair the programming of the implants.

The external bit you see on him are on him using a magnet and they come off millions of times per day! You have to teach the child to keep them on, this means persistence like you have never known before!

There are also some things that you come across that you would never think of unless you were in this situation, finding a cycle helmet to fit is really tricky! Ewan uses other communication methods, which are not always understood by others. he taps on people to get their attention, other children sometimes think he is being horrible, but it is just Ewan's way to get their attention. Ewan also taps on the chair next to you for your attention and he will grab your face and turn it so you are eye to eye looking at each other." 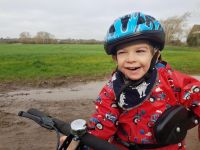 What would you say to others going through similar experiences?

Thank you so much Mary for sharing your experiences with us, and I hope it has helped others reading.

I have also used The National Deaf Children's Society to research which I have found really useful, so if you do want to know more, please head over to https://www.ndcs.org.uk/