On 20th July 2019, it is the 50th Anniversary of the Moon Landings, so we are planning a week filled with Space themed play.

To kick start the week, one of my lovely customers, Caroline has provided a review of the Robot Construction Kit.

My kids are robot OBSESSED. It started with Ned, who we naturally cant get enough of, then extended into robot books, t-shirts, pajamas… if its got a robot on, they want it. We have made robots using junk from the recycling box, and even robot costumes – mostly out of delivery boxes from The Wooden Play Den! So when I saw the Tenderleaf robot construction set it was a no-brainer. 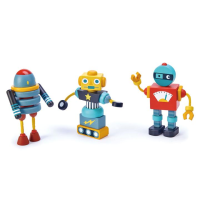 Both the kids and I are delighted with this construction set, and it has quickly found a permanent spot on our toy shelves. I like to break it down into pieces and place these in a basket so that the boys are approaching it afresh each time. Coby, my two year old, loves putting them together and immediately taking them apart again, just to hear the click of the pieces. It’s been great for his fine motor skills and the robots have become part of our space play scenes, particularly ahead of the moon landing anniversary this month! In combination with our Life on Mars playset and Toys by Nature play bases we have thoroughly enjoyed acting out our own jaunts into outer space, and we also used the robots to leave “footprints on the moon” in playdough, looking at the different shapes and sizes the robot feet left behind – a great exercise in foundation mathematics. 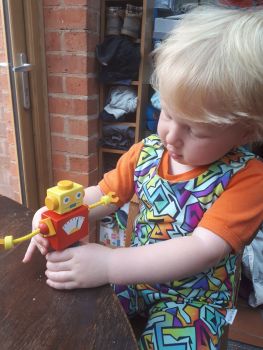 I love a toy that covers all bases, and am happy to say these have been equally popular with my 6 year olds, only we have been talking and reading about space exploration in greater detail. The emphasis on the rovers and the important part robotics have played in space exploration has triggered conversations about mechanics and computer coding alike. STEM is not my area of expertise, so I rely heavily on books to help me answer their many questions! 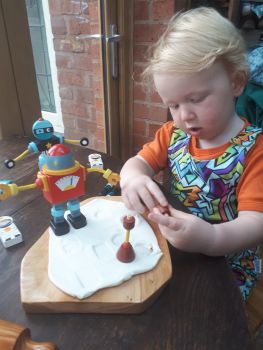 In more practical terms, the twins have enjoyed using the construction kits to experiment with design. There are enough component parts to build three robots, and although there is no “right” way, we have definitely decided on an optimum way. Trial and error, in combination with teamwork, have taught us which combinations make for the sturdiest robots, which elements we can sacrifice in one robot to make THREE reasonably well-balanced robots, WHY one robot might be wobbly, or not stand up at all. There are opportunities to expand vocabulary around construction and balance, and encourage questioning, experimentation and outcome. We talked about how they could make sure they built the robots the same way next time, and the need to record what they had found out. My twins are not big fans of writing, so they opted to record their results by drawing the three robots, one deciding the best option would be to draw AROUND the robots like stencils, the other creating fantastic charicatures of all three. 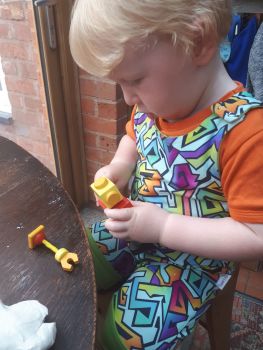 Overall, I was drawn to this set for its obvious merits in imaginative play, but with the help of three naturally curious children – as is often the case – I have discovered it holds so much more value than I first thought!

Full details of the Robot Construction Kit can be found here